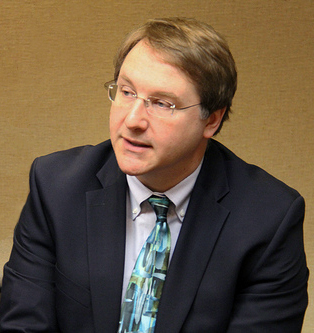 John Frenzel is the chief medical information officer at The University of Texas MD Anderson Cancer Center, where he also serves as a professor in the Department of Anesthesiology and Perioperative Medicine.

As CMIO, he has the responsibility to provide patients, providers and researchers access to information and tools to further their understanding of cancer and its treatment.  He leads a team responsible for a comprehensive reporting environment that supports operational and research queries.

With an introduction like that, you may be wondering, “What led him to his current success?”

Frenzel’s interest in computers and technology was sparked in high school.

“My high school had its own mainframe, and I thought it was the most fascinating thing on the planet. I spent as much time as possible learning how to program it,” Frenzel said.

Although he knew that one day he wanted to work in IT, Frenzel’s parents, who were children of immigrants, encouraged him to pursue medicine. In 1986, after studying biology and chemistry at Emory University, Frenzel pursued his Doctor of Medicine degree at Baylor College of Medicine in Houston. While in medical school, Frenzel chose anesthesiology as his specialty.

“I realized that primary care wasn’t for me. I liked the procedure side of medicine more but also enjoyed interacting with patients,” he said.

After graduating from medical school, Frenzel completed a fellowship at the Mayo Clinic and worked in hospital and private practice settings. He took a brief hiatus from medicine for three years, during which he earned his master’s degree in health informatics from UTHealth School of Biomedical Informatics—then known as the School of Health Information Sciences. He also taught classes at the school, started a business and co-wrote a book with his father—a veteran of the U.S. Air Force who earned a doctoral degree in atmospheric physics and worked at IBM as a mathematician.

Frenzel realized that he wouldn’t be able to stay away from medicine for long, and with encouragement from his wife, a faculty member at MD Anderson, he decided to join MD Anderson in 2003.

“My goal was to practice anesthesia and bring a physician’s understanding to the implementation of information technology and how clinical practice fits into that workflow,” Frenzel said.

Frenzel moved up the ranks at MD Anderson from clinical assistant professor to full professor and CMIO. As such, Frenzel lends his expertise as part of the leadership team that will onboard MD Anderson’s newly announced off-the-shelf electronic health record system.

“The new EHR (at MD Anderson) will help us drill down into our data. And we’re going to take that data – our patient experience, our understanding of subcellular biology, all of our data – and change the planet through personalized medicine.”

When asked if he would ever retire, Frenzel said, “No, I really think that you have to live fiercely—that we are all here at this time and place for a reason. It is up to each of us to find that reason and do everything we can to improve the human condition. That’s a mission you can never really retire from.”