Use of Virtual Educational Spaces at SBMI

What are Virtual Educational Spaces?

Virtual Educational Spaces (VES) in its strictest definition stands for virtual 3D environments where a physical space is simulated on a device such as a computer and is accessed by users through the use of graphic UI, mouse, keyboard and/or other controller. VES can be used for simulations, conferences, class presentations, poster sessions, counseling, and self-guided exploration.

The realm of research in virtual reality and simulations in the 1990s was strictly confined to a few high budget research facilities and the military. The 2000s brought with it a leveling of the playing field through the introduction of better displays, high-powered yet affordable graphics processor cards. In the past decade, as advances in technology became widely available for public use, new platforms for virtual reality software emerged.

Starting with the late 1990s, some of the earlier free or affordable virtual reality platforms were intended for solitary explorations. Such an example would be ActiveWorlds, founded in 1995 and is still going strong

In the mid-2000s, just as the Internet went from Web 1.0 to Web 2.0, virtual spaces became more community based. The new breed of virtual worlds facilitated the formation of social connections and allowed the sharing of digital assets in a collective authorship as community environment.

While affordable virtual worlds were making strides, the console gaming community was also experiencing its own evolution; games were becoming more social. Single player gaming was getting replaced by team play. Players were using text chatting and voice chatting to communicate with each other within the games.

When this networked gaming market collided with the virtual reality realm, a whole new breed of games were born: massively multiplayer online roleplaying games (MMORPG). In the latter part of the 2000s, networked MMORPG games such as World of Warcraft and The Sims slowly became the norm. In the mid-2000s, other forms of MMORPGs emerged. They looked like games, but they were not games as there were no mission, no points, and no villains to vanquish. These MMORPGs were called virtual worlds and included the following: Second Life, OpenSim, There, Google Lively, Cloud Party, Kaneva, AvayaLive, and Sony Playstation Home

Second Life amongst its peers was the most open-ended platform. Institutions could purchase a plot of land, build their educational spaces using the tools provided by the platform and then hold educational activities per their own guidelines limiting access to their students alone if needed.

Second Life (SL) is an online virtual world that was developed and launched on June 23, 2003 by Linden Lab. A number of free client programs, or viewers, enable Second Life users, called Residents, to interact with each other through avatars. Residents can explore the world (known as the grid), meet other residents, socialize, participate in individual and group activities, and create and trade virtual property and services with one another.

SL became too popular too quickly soon in 2006-2008. The technology was simply not ready for the influx of users, many of which included educators. The technical problems caused by high user volume between 2007-2009 forced Linden Lab’s to take a look at the SL platform and a series of infrastructure improvements were made to SL between 2009-2011. These improvements in turn provided better stability and scalability. However, these improvements came too late and many organizations that had moved into SL in 2006-2008 had moved out of SL by late 2010.

Between 2006-2010, aside from complaints about lack of polish and scalability, educators had also complained about these other feature shortcomings in SL:

As a result, Linden Lab added all these features incrementally between 2009 and 2012. Ironically, SL hit its maturity point soon after a significant group of educators and organizations abandoned it. Those organizations that remained in SL enjoyed the new stable and feature-rich environment SL offered.

SBMI acquired their SL campus in late 2009. The first iteration of the virtual campus included a central UT tower with offices for faculty members, several other buildings that contained classrooms, an auditorium, an ambulatory clinic and a SL orientation area. 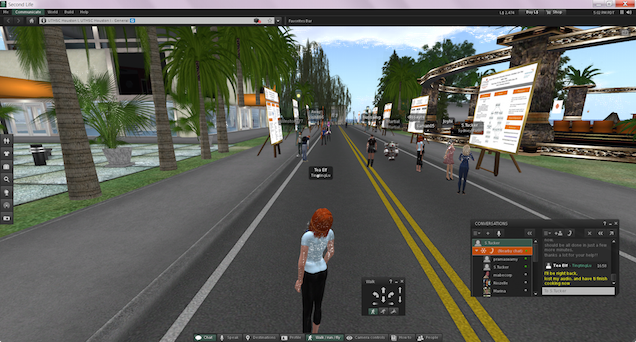 The virtual campus was used heavily between 2010 and 2013 by faculty and students for classes, office hours, presentations, guest speakers and graduation ceremonies. However, by the time 2014 rolled around, SL use at SBMI had hit an all-time low.

After I joined SBMI in May 2014, because I had been a part of a dedicated Virtual Learning Spaces team in at my former institution, Texas State University – San Marcos, I felt it was necessary to figure out how the SBMI SL virtual campus could be revived. At Texas State, my team had successfully used SL for a wide gamut of subjects such as philosophy, education, mass communications, geography, journalism and nursing. The Texas State team had sustained SL’s use through the 2006-2014 timeframe and even managed to increase demand for the platform over the years. There was no reason SBMI could not continue using SL beyond 2014. 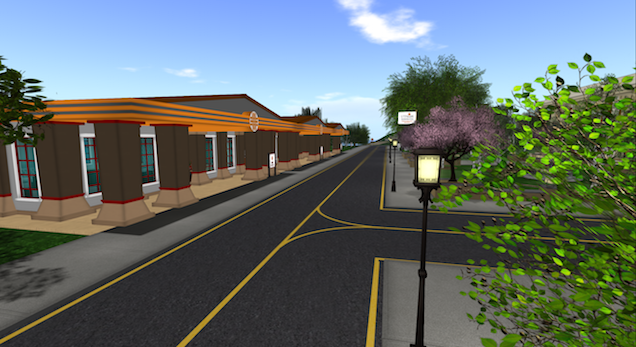 I took on the task of upgrading our virtual campus. During fall 2014, there were no classes scheduled to use SBMI’s virtual campus in SL and that was an opportunity to do a renovation. We elected to keep the master plan as it was and every building was rebuilt from scratch to optimize user experience and resource usage. Upgrades performed were focused on lowering the number of polygons that a user’s computer has to render. A lower number of polygons means fewer calculations which translates to less visual lag on the user’s computer.

During that time, SBMI faculty would pay occasional visits to review the progress of the upgrade and provide comments and feedback. The renovation process wrapped up by the end of 2014 and the new campus opened for the spring 2015 semester.

During spring 2015 Security for Health Information Systems was the first class to use the new campus. The course, which is taught by Dr. Juliana Brixey, received positive feedback.

This semester, we also hosted a Second Life Orientation class synchronously in SL and 75 students attended, many were from multiple classes and even institutions. The class covered the basic competencies every avatar should master to use SL comfortably for class work and beyond.

SBMI’s Distance Education team is actively reaching out to other SBMI instructors to get more instructors to use Second Life in the coming semesters. If you are interested in using Second Life for your class please contact us at de@uth.tmc.edu.

You can visit SBMI’s virtual campus in Second Life at the following url:
http://maps.secondlife.com/secondlife/UTHSC Houston I/127/129/26

If you have not already registered for a free account, please go to www.secondlife.com first and then use the url provided above after you have logged into the SL client.