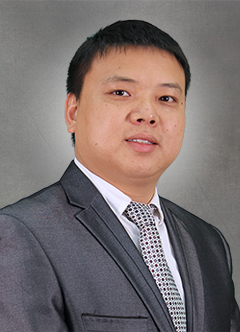 Yungang Xu, Ph.D. became a Faculty Associate at the School of Biomedical Informatics (SBMI) on July 1, 2017 and then was promoted to Assistant Professor on September 1st, 2017. Before arriving at SBMI, Xu had served as a postdoctoral fellow in the Baptist Medical Center, Wake Forest University School of Medicine (WFUBMC) since 2015. During his postdoctoral training at WFUBMC, Xu worked within the Center for Bioinformatics and Systems Biology, supervised by Professor Xiaobo Zhou, Ph.D. Prior to his postdoctoral training, Xu was a joint PhD candidate from 2010 to 2014 within the School of Computer Science & Technology and School of Life Science & Technology, at Harbin Institute of Technology (HIT), supervised by Dr. Maozu Guo, a professor of Computer Science.

Xu has a background in both biology and computer science. He has authored/co-authored 16 publications and worked on several grant funded research projects as an investigator. While working at WFUBMC, in conjunction with Professor Xiaobo Zhou, Ph.D., Xu used the high through-put next generation sequencing (NGS) data of both transcriptome and epigenome, combined with computational methods, such as deep learning neural network, to decipher how alternative splicing (AS) is regulated/modulated by epigenetic properties, such as histone medications. Specifically, his work revealed that the AS is a mechanic link between histone modifications and cell fate decision during embryonic stem cell (ESC) differentiation, indicating that histone modification contributes to normal development through determining not only what parts of the genome are expressed but also how they are spliced. During the completion of his doctoral program, Xu focused on inferring, modeling, and analyzing biological networks, especially the bi-layer network clustering to get insights into complex life systems.

“The ways stem cells decide their fates have been linked to multiple levels of mechanisms, genetically and/or epigenetically, from chromatin states to transcripts structure.” Xu said. “Co-transcription enables the crosstalk between chromatin and transcripts through the AS, extending the splicing code from genetics to epigenetics. Deciphering the splicing (epi)genetic code of ESC differentiation has the broad impact on the field of (epi)genetic reprogramming in both mammalian development and human disease evolution.”