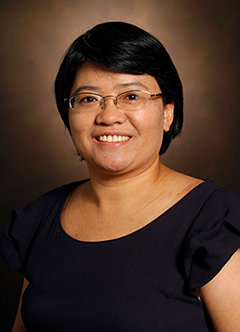 UTHealth School of Biomedical Informatics (SBMI) Assistant Professor Jingchun Sun, Ph.D. passed away on Jan 6. 2017. Dr. Sun, who was called Sunny, died at the age of 45 in Houston, TX after her courageous battle with cancer.

Sun joined SBMI in 2013 as an assistant professor specializing in research. Prior to arriving at SBMI, Dr. Sun spent five years in various roles at Vanderbilt University School of Medicine’s Departments of Biomedical Informatics. During her tenure there, she worked as a research assistant professor, research instructor and postdoctoral fellow.

SBMI Robert H. Graham Professor in Entrepreneurial Biomedical Informatics and Bioengineering Hua Xu, Ph.D. is the principal investigator for the CPRIT grant and during Dr. Sun’s time at both SBMI and Vanderbilt, the two worked together on various research initiatives.

“It was a true privilege to work with Sunny and to explore the contributions she gave to the field of bioinformatics,” Xu stated. “She dedicated her career to developing specific methods and strategies needed for combating diseases like cancer and psychiatric disorders. Her research paved the way for the development of drugs and treatments to help countless others who will suffer from those diseases in the future.”

Sun earned three degrees from various universities in China before she came to the United States. She earned an undergraduate degree in freshwater fishery from Southwest Agricultural University (Chongqing, China) in 1995 and received her M.S. in aquatic genetics in 2001 from Shanghai Fisheries University. In 2005, Dr. Sun was awarded her doctorate in biochemistry & molecular biology from Shanghai Jiao Tong University.

“Our school and the bioinformatics community have suffered a tremendous loss with the passing of Dr. Sun,” said SBMI’s Dean & the Glassell Family Foundation Distinguished Chair in Informatics Excellence, Jiajie Zhang, Ph.D. “Sunny’s legacy of excellence in research is not all that will be missed as she was both a kind colleague and dear friend to so many here at SBMI.”

Sun is survived by her husband Jian Wang and her son Wende. A memorial page has been created in Dr. Sun’s memory and a private ceremony will be held to memorialize her life and many accomplishments.